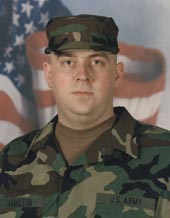 Mr. Walter Ray Hamilton, 41, of Richmond, passed away Friday afternoon, December 11, 2020 at Baptist Health Richmond.  He was the son of George Hamilton and the late Dorthey West Hamilton born on March 7, 1979 in Barbourville.

Walter faithfully served his country in the United States Army serving two tours in Iraq and was of the Baptist faith.  He was a graduate of Union College where he played baseball and earned a degree in education.  He enjoyed sports, watching UK basketball and football, playing golf and spending time with his family.

On December 26, 2004, he united in marriage with Amy Patterson and to this union a daughter was born.

In addition to his mother, he was preceded in death by his grandparents, Walter and Celia Hamilton and Conley and Sallie West and a nephew, Conner Ryan Curry.

His funeral service will be conducted in the chapel of the Knox Funeral Home Wednesday, December 16 at 1 P.M. with Rev. Garrett Garland and Rev. Steve Honeycutt officiating.  He will be laid to rest in the West Cemetery at Davis Bend.

Arrangements are under the direction of the Knox Funeral Home.

Please remember, during the continuing COVID-19 event, capacity restrictions and social distancing guidelines will be followed during all services including the wearing of face coverings as mandated by the Governor of Kentucky for the safety of our families, guests and staff.

Send a condolence to the family of WALTER RAY HAMILTON.

For questions about our obituaries or condolence service, please contact us. You may reach us via  e-mail at knoxfuneralhome@barbourville.com. Reach us via phone by calling 606-546-2222.